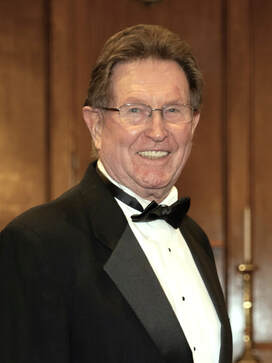 But I could sing! For years, my Uncle Ray had thrown me to the Lions, the Elks, and the Fort Lee Republican Club just to show me off. Four years in the boys’ choir at Madonna School, four in my high school glee club and six in Fordham’s (B.S. through M.S.). I could sing. And I found a wife among the altos.

The faculty at JHS 125, Bronx, put on Fiorello, and I sang Neill’s part. Then we did Guys and Dolls and I really enjoyed being Sky.

At Mt. Carmel Parish, I served as song leader from the late sixties through the early eighties, sang two seasons with the Ridgewood Gilbert and Sullivan Light Opera Company, and also performed elsewhere at every chance. There was always fun in it. 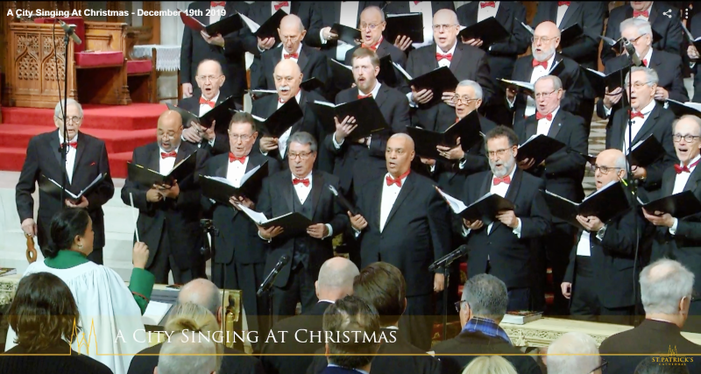 Jim O'Rourke (front row, third from left) at the St. Patrick's Cathedral concert "A City Singing at Christmas," on Dec. 19, 2019.
Pete Fenzel invited me to the Orpheus Christmas concert. I saw guys having a lot of fun, singing and doing it so well, that I joined up in early 2018. I had a tux hanging in the closet too — another good reason to join.

I was psyched to get to the dress rehearsal but was a little late trying to remember how to tie my bow tie. When I walked in, the chorus had started to rehearse. I was the only one in a tux. When the laughter died down, our conductor told me that “dress” didn’t really mean to “dress.” Nevertheless, I kept my tux on and joined the rehearsal.

Singing with Orpheus is challenging, for sure, but there’s fun in it too. And it’s so gratifying to work at sharing the music with men who, in more than one way, work together in harmony.