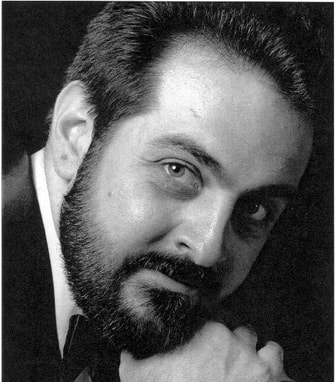 John J. Palatucci
John J. Palatucci enjoys a distinguished career as a performing musician, conductor, clinician, an adjudicator, and educator. He holds a Bachelor of Arts degree in music education, a Master of Arts degree in music performance from Montclair State College of New Jersey, and a Masters of Education degree in educational leadership with all accompanying certificates from NJ EXCEL. He started singing at the age of eight in a family Christmas pageant. His love affair with choral music began at the age of 10 when he was selected for his hometown church's boy choir.

While a student, Mr. Palatucci was active in choral, musical theater and operatic projects under Kenneth Cooper, David Randolph, Dr. Jack Sacher, and Dr. Benjamin Wilkes. He has pursued further study with Dr. Anton Armstrong, R. David Higgs, and Audrey Turner. For over 30 years he served as section leader, soloist, and assistant conductor for the choirs of Grace Presbyterian Church in Montclair, New Jersey.

He has appeared as soloist for area churches and community organizations, performing with such noted conductors as Henry Brant, Lucas Foss, Morton Gould, Skitch Henderson and Karel Husa. During the summer of 1977, he toured Europe as a soloist with the International Congress of Christian Musicians. In 1980, for the 75th Anniversary of St. Francis of Assisi Church in his hometown of Haskell, Mr. Palatucci organized a massed choral festival for which he received an Apostolic Blessing from Pope John Paul II, returning to lead similar events in honor of the 50th anniversaries of D-Day and VE/VJ Days. He was honored by the Jaycees in 1982 with an "Outstanding Young Man of America" award.

In 1983 Mr. Palatucci accepted the music department chairmanship of the Eastern Christian School Association of North Haledon. It was while teaching at Eastern Christian High School (ECHS) that he developed a reputation as a builder of fine choral programs. He increased enrollment and upgraded the repertoire of the school's flagship ensemble, the Concert Choir, established a select group called the Chamber Singers and, via mutual encouragement with his students, the Gospel Ensemble which dedicated itself to the performance of contemporary African American gospel music.

​The ECHS Concert Choir and Chamber Singers won five national level championships while consistently receiving Division I Superior ratings and, along with the Gospel Ensemble, invitations to perform in Israel, at Washington D.C.’s Kennedy Center and throughout the greater New York metropolitan area. Palatucci; Dr. Jennifer Pascual, Director of Music at St. Patrick's Cathedral; Ron Levy, Orpheus Pianist and Assistant Conductor, at St. Patrick's on Dec. 19, 2019.
Numerous members of his choirs were awarded places in regional, state, national and international honor ensembles. Many of these students have gone on to careers as professional musicians and music educators while others actively participate in local church and civic ensembles.

He left ECHS in 1990 to become director of choral and orchestral ensembles at Madison High School where his students again distinguished themselves at both the regional and state levels.

Mr. Palatucci has guest-conducted the American Boy Choir, the All-North Jersey JHS Orchestra, the Peninsula Combined HS Band and the Central Jersey Intermediate School Band. In the spring of 2004, as guest conductor he led the Verona High School Concert Chorus to the North American Music Festival in Virginia Beach, Virginia, winning another Division I Superior rating and best-in-show title.

He serves as an adjudicator and clinician for the New Jersey Music Education Association, Good News Travel and The Offstage Group of NYC, among others. He has been heard over WQXR, WFME, and Sirius radio, and recorded for Delos Records International, the Educational Testing Service, Koch Records, the Musical Heritage Society and the US Merchant Marine Academy.

Mr. Palatucci served on the executive committee for the 1991 Billy Graham Northern New Jersey Crusade where he recruited and oversaw a 3,000-voice choir. He served the Camp-of-the-Woods of Speculator, New York, as 1993 music director. From 1996 through 1998, he led the Ridgewood Singers Mixed Chorus. From 1992 to 2018, he taught music in the Livingston public schools. He has also served on the faculties of Caldwell University, Montclair State University, and William Paterson State University, teaching applied music, pedagogy, and chamber music. Palatucci, right, with Richard Lane at the piano, and Orpheus members at a Nov. 7, 1991, rehearsal at George Washington Middle School in RIdgewood.
In the fall of 1990, Mr. Palatucci became music director of the Orpheus Club Men’s Chorus (OCMC). During his tenure, he has striven to uphold and enhance the OCMC's proud history, tradition and reputation. These efforts include arranging for the chorus, several commissions of new music for male chorus which are dedicated to him, and performances of: In the spring of 2005, he led the OCMC in its Lincoln Center debut, performing at the Lincoln Center Library with the Palisades Virtuosi chamber ensemble. Through his efforts, the OCMC became a charter member of the New Jersey Choral Consortium (NJCC) in 2008 where he sat on the board of directors and served as vice president.

Palatucci at Orpheus' centennial concert in 2009.
In January 2009, he was honored by his colleagues at Montclair State University, being selected as speaker at the annual Dr. Jack Sacher Memorial Lecture. In 2011, his setting of Percy Grainger’s Sussex Mummers’ Christmas Carol was published by the International Percy Grainger Society. With Mr. Levy, he prepared the OCMC and its sister ensemble, the Ridgewood Choral, for a performance of the Beethoven Choral Fantasy with the Bergen Philharmonic Orchestra.

A 2013 debut performance​ at Carnegie Recital Hall with members of the OCMC included the NYC premieres of Peter Findley’s Ubi caritas and Godfrey Schroth’s Orpheus with his lute. In December 2016, he made his Lincoln Center conducting debut in David Geffen Hall at the 49th annual Messiah Sing-In sponsored by the National Chorale, returning every year since.

​He led the OCMC in a 2018 guest appearance with the Montclair, NJ Citadel of the Salvation Army Band. In December 2019, he and the OCMC appeared at St. Patrick Cathedral's 40th annual “A City Sings At Christmas.”​