Paul Nelson and Ellen Nelson
In 2016 my teaching colleague and good friend, Dave Strife, and now brother in song sent me an email and called me about a fine singing group in Ridgewood, the Orpheus Club Men’s Chorus, that he thought I would enjoy joining.

I only had experience singing in church and singing for a time in my youth in a Glee Club in college and high school. No matter, he assured me that there actually were not any tryouts for the group and that joining only required a love of singing and a heart for service.

I threw caution to the wind, or rather I gathered all the “wind” I could muster and arrived.

Sitting in the baritone section I was immediately put at ease and introduced to the group. They suggested I sit next to a young singer named Jay as he was a strong voice.

Weeks later, learning that his last name was Palatucci, I realized that he was the son of the group's capable director, John Palatucci. 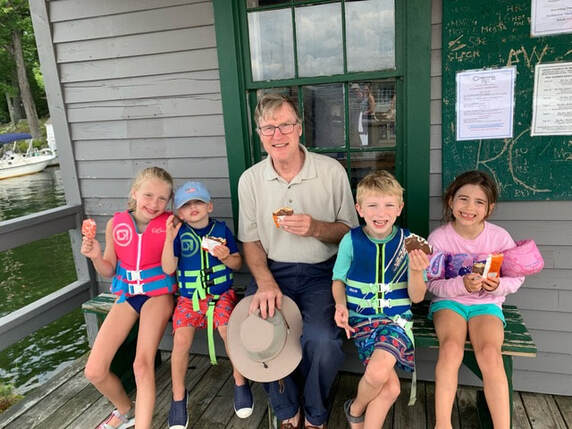 Paul Nelson and grandchildren.
For the concert I tailored a black tux languishing in my closet and purchased a bright red bow tie and I was apparently set. John, despite my height, placed me in the front row right next to the piano. Was this a cause for concern?

Now, I sing with the small doo-wop group and even recently sang my first public solo. It was a brief solo: I was a king from the east visiting a newly born child, a child who Himself was destined to be King.

My kind and beautiful Ellen, wife of 40 terrific years, brings a crowd to the concerts. Together we have four adult children and four grandkids with the possibility of more. We live in Cresskill and it is only a short drive to the Wednesday night rehearsals.

Having retired from teaching high school biology for almost 40 years, the music keeps me young in mind. I ski, swim, hike, and especially do lots of yard work to hopefully keep the body young. A fellow Orpheus singer, Mitch Shapiro, when I mentioned having played the clarinet in my youth, suggested I also join the Waldwick Band. I did, and this has also been great fun for me.

My future goal is to sing about how “All God’s critters got a place in the choir …” in concert, while hearing the lively music of pianist Ron Levy. God is great and life is good.
Published in January 2022