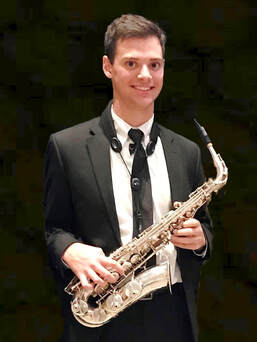 Kieran Corcoran
Kieran Corcoran, a saxophonist from Ridgewood, New Jersey, has been named as the recipient of the 2020 Roland L. Meyer Scholarship Award by the Orpheus Club Men's Chorus (Orpheus).​

Corcoran, a senior at Ridgewood High School, is the woodwind captain of the school’s marching band, and president of the band council. He has played in the concert band, wind ensemble, big band, saxophone ensemble, and pit orchestra at the school. He also has served as a music mentor and district band member.

Corcoran has won numerous musical honors, including Region 1 and All-State Wind Ensembles as a junior and senior, and Music Educators of Bergen County Inc. (MEBCI) honors for six straight years. In November 2019, he played principal 1st Chair alto saxophone in the All-National Honor Ensemble Concert Band of the National Association for Music Education (NAfME). He has been on the honor roll or high honor roll for all four years of high school.

Jeffrey G. Haas, Director of Bands at Ridgewood High School,  called Corcoran “an outstanding musician, a quality leader, and a mature, responsible young man whom I have learned to trust, respect, and value greatly.“ Corcoran is passionate about music study, practice, and performance, and has mentored younger, less experienced saxophonists, Haas wrote in a letter of recommendation.
​Corcoran plans ​​to attend the College of the Holy Cross in Worcester, Massachusetts, where he’ll study music. He also hopes to play with the jazz and wind ensembles at Holy Cross. The Orpheus scholarship includes a $2,000 award toward his college studies.
​​
​The Roland L. Meyer Scholarship winner traditionally performs at Orpheus’ spring concerts. Because of the Covid-19 pandemic, Orpheus’ spring 2020 concerts were canceled.

John J. Palatucci, Music Director of Orpheus, said he was impressed with Corcoran’s musicianship and well-roundedness. “The scholarship committee every year has the joyful yet difficult task of picking a winner among many qualified young musicians,” Palatucci said. “Kieran’s musical and leadership achievements made him stand out.”