The chorus sang again at Ridgewood's 2019 Fourth of July Parade. "The Orpheus Club IS Ridgewood" and also represents the best of our greater northern New Jersey community.
Below: We sang for our friends at Holland Christian Home on Tuesday, July 16, 2019. Our music director, John J. Palatucci, played "Carnival of Venice" on the euphonium, and our pianist, Ron Levy, played Scott Joplin's "Pineapple Rag." Photos courtesy of Holland Christian Home.

Singing in Ridgewood: Winterfest and Holiday Concert, ‘Stars of Wonder, Songs of Light’

On Saturday, Nov. 30, 2019, we performed Christmas carols in Ridgewood's Winterfest at Van Neste Square, from noon to 1:30 p.m. 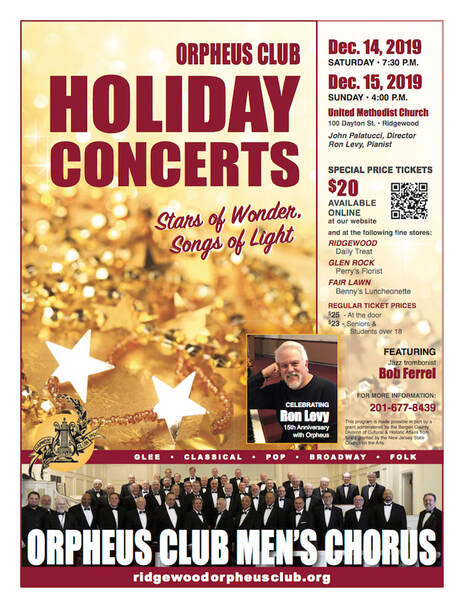 ‘A City Singing at Christmas’
​at St. Patrick’s Cathedral

On Thursday, Dec. 19, 2019, we performed in the 40th Annual "A City Singing at Christmas" concert, under the direction of Dr. Jennifer Pascual at St. Patrick's Cathedral in New York City. The entire video (2 hours, 15 minutes) from the event is here and also below. Click the play button then the arrow symbols to open in a full screen.
​Click on any title below to see video at the start of that specific performance. (The times and durations include introductions and applause.)
Photos from the concert and rehearsals: